The Species Identification Guide is an application providing access to information about various species inhabiting the St. Lawrence ecosystem. Species can be searched by their French, English or scientific name (latin). Details about their characteristics along with pictures and distribution maps are available. 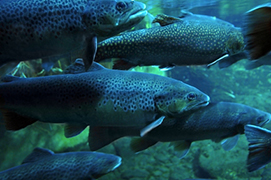 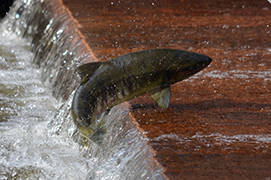 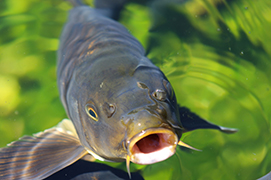 As a first step, substantial efforts have been made by Fisheries and Oceans Canada in order to validate and make marine fish information available. However, the application has been developed by SLGO with the objective of eventually including freshwater species, invertebrates, marine mammals, sea birds, etc.

An administration interface has also been developed to allow data uploading by experts adding new data to the identification guide. 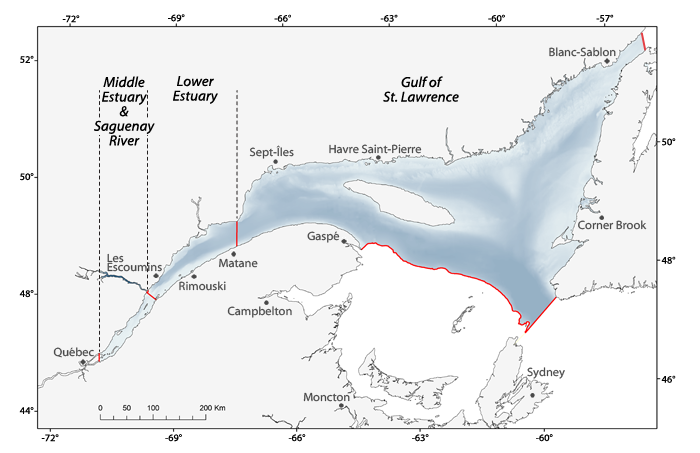 Anyone interested in the sea and its various organisms can find on the Internet a wealth of information. Whether using "Atlantic cod" or "snow crab" as keywords, a lot of information is available; however, like the sea, the Web is not limitless. When restricting a search on cod or crab to a specific area, results are even more concise. Those interested in the diversity of organisms that live in the marine environment in a particular region are often disappointed. This online guide focuses on marine resources of the Saguenay Fjord, the middle and lower St. Lawrence Estuary and the northern Gulf of St. Lawrence and aims at raising awareness about the diversity of marine organisms living in the area while providing a privileged access to the data and scientific information collected. 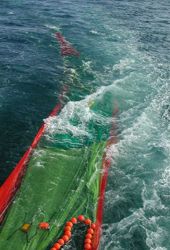 Those interested in the migration of whale sharks, the history of the cod fishery or the eel's life cycle, can find on the Internet a wealth of information, but beyond these more popular cases, what else is there? How much is known about the snowflake hookear sculpin, the lowfin snailfish or the northern seadevil in the Estuary and Gulf of St. Lawrence? Although not as well known to the general public, these species, with intriguing names, also play a significant ecological role in the ecosystem.

Generally, knowledge about fish stems from observations from fishing gear catches. This is often the case for species living offshore. The gear that is used determines in some way the perception of the relative abundance of a species. Trawls or seines do not yield the same species as longlines or gillnets. Different trawls operated by different boats provide different results. Some gear can be used on soft bottoms and therefore cannot sample species that prefer rocky bottoms. For an overview of the diversity of fish in an environment as complex as the Estuary and Gulf of St. Lawrence, it is necessary to compile data from multiple sources.

What the Guide Provides

The guide aims at raising awareness about the marine and estuarine species found in the study area. For each species, one or more photographs from various sources are available. Information regarding the status of the species in the study area can be found under the section "Global characteristics". Some of the criteria used to confirm the identification of the species are presented in the section "Characteristics specific to the species". When a species can be mistaken for another, links are available for easy comparison. These links appear in the section "Possible confusion with...". When the species is listed in the annual groundfish abundance surveys, additional information appears such as a distribution map and catch data (see below).

The annual survey conducted by Department of Fisheries and Oceans scientists on board large trawlers is an important source of information about the status of exploited marine resources of the Estuary and northern Gulf of St. Lawrence. The main objective of the survey is to estimate the abundance and biomass of Atlantic cod (Gadus morhua), Greenland halibut (Reinhardtius hippoglossoides), Acadian redfish (Sebastes fasciatus), Deepwater redfish (Sebastes mentella), and Northern shrimp (Pandalus borealis).
In recent years, to better predict the evolution of the abundance of these species, biologists have tried to include more information on other ecosystem components. During the survey, the capture of other fish and invertebrates is described. The observation and sampling protocol which has long prevailed has gradually evolved into a considerably more detailed and complex protocol. However, the implementation of this protocol has encountered the difficulty of clearly identifying the dozens of demersal species caught in trawls.

For the period between 2004 and 2008 and using the DFO annual bottom trawl survey database, catch statistics are also presented under "Observation(s)":

The St. Lawrence is a complex environment, a dynamic mosaic of various habitats. Producing a comprehensive and quantitative inventory of species in this environment represents a considerable challenge. Introduced in the '30s by the pioneers from the St. Lawrence Biological Station at Trois-Pistoles, and continued by their successors until today, this descriptive work can now be amenable to equally complex analysis of the links between species or assemblages of species and their preferred habitats.

Whether you rely on the sea or frequent the region's coasts or piers, this guide presents the species that occur there, some of which are perhaps unknown to you, and will help you appreciate the diversity of species that inhabit the St. Lawrence.