Have You Seen Capelin Spawning?
Submit your Observation 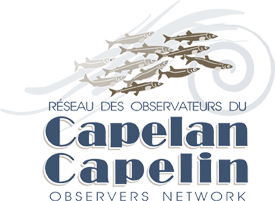 As the spawning season approaches, capelin begin an intensive migration to the coast to spawn on sandy or fine gravel beaches or on the seabed, at depths of 30 to 280 m. When capelin spawn on beaches, this is called “rolling” or “landing.” In the Estuary and Gulf of St. Lawrence, capelin “roll” on the shores between mid-April and July, depending on the area, when water temperatures are between 6 and 10 °C. Spawning usually occurs at night.

At the start of the spawning season, male and female capelin form two separate shoals. The males move inshore first and wait for the females, which stay farther offshore until ready to spawn. When the females arrive, spawning begins. The males push on the sides of the females to expel the eggs. Using sweeping movements with their caudal fin, they deposit the fertilized eggs in the sand or gravel. The eggs are enveloped by a sticky substance, which holds them in place and protects them from tidal action and predation.

After spawning, it is not unusual to see large numbers of dead capelin on the beach or in the water, particularly males that are injured during repeated mating. 1

The duration of the incubation period depends on the ambient water temperature. On average, it lasts two weeks. After hatching, the larvae feed on animal plankton, composed of tiny crustaceans. The juveniles will grow to a length of 2 to 4 cm before their first winter.

The Network has collected 1,713 observations since its founding. Of these, 913 observations involved spawning activity, 390 observations were of signs of capelin presence and 383 other observations did not indicate clearly whether spawning or some other type of activity was taking place. The information gathered, including the date and time of each observation, tidal conditions and the type of spawning site, is helping to reveal trends that can assist in answering questions such as:

Time of Day
Capelin appear to spawn more frequently in the darkness, at least when this activity takes place along the shoreline. According to Network data, spawning is observed five times more often at night, namely between 6:00 p.m. and 6:00 a.m., than at other times of day.

Tides
Comparing spawning observations against tidal information reveals that capelin are 14% more likely to spawn during the rising tide than the falling tide. (Figure below).

Capelin is a small cold-water fish of the Northern Hemisphere. It is found in the Atlantic, Pacific and Arctic oceans, from northern Europe to northern Japan, including Russia. In Canada, it occurs on both the west and east coasts. In the Northwest Atlantic, it is found along the shores of Newfoundland and Labrador, on the Grand Banks and in the Estuary and Gulf of St. Lawrence.

Interestingly, the range of capelin can vary locally from year to year depending on the ocean temperature. Indeed, it is considered an indicator species for temperature. During years when the water is colder, its range extends a little further south, sometimes as far as the Gulf of Maine.

A recent study 2 revealed considerable genetic diversity in capelin. The DNA (mitochondrial) analysis of capelin from the three oceans revealed the existence of four distinct major groups, distributed as follows:

During the breeding season, capelin begin an intensive migration to the coast and spawn on beaches or in deep water (up to depths of 280 metres).

Have You Seen Capelin Spawning?
Submit your Observation

According to the great majority of observations, spawning occurs on sandy beaches (79%). However, the data collected do not specify the substrate diameter. Spawning also takes place on gravel beaches slightly more than 10% of the time.

When capelin reproduce on the shore, this is called “rolling” or “landing,” literally on sandy or fine gravel beaches. Spawning occurs mainly when the water temperature is between 6° and 10oC and is most commonly observed at night. In the estuary and Gulf of St. Lawrence, the capelin “roll” on the shores between mid-April and July. They rely on the tides to carry them to the beach.

At the spawning sites, the capelin form banks of opposite sexes. The males reach the beaches first and await the females. When the females arrive, the males grasp onto them and, together, they dig a depression in the bottom using rapid tail movements to deposit the eggs and milt. A sticky substance on the reddish-coloured eggs enables them to remain attached to the sand or gravel substrate until the larvae hatch. Following this intense activity, the capelin may remain inactive for a few seconds before heading back toward the sea. A large proportion (more than 90%) of capelin die after spawning, especially the males that are injured during repeated mating on the sand or gravel. After spawning, it is not unusual to see large quantities of dead capelin on the beach or in the water.

During spawning, capelin give off a very characteristic cucumber odour. For local residents, this odour is a tell-tale sign that the capelin are spawning. 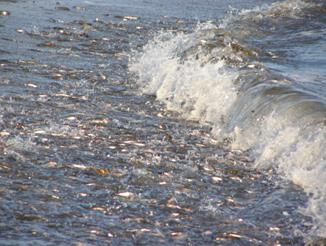 Fish eggs of the Capelin 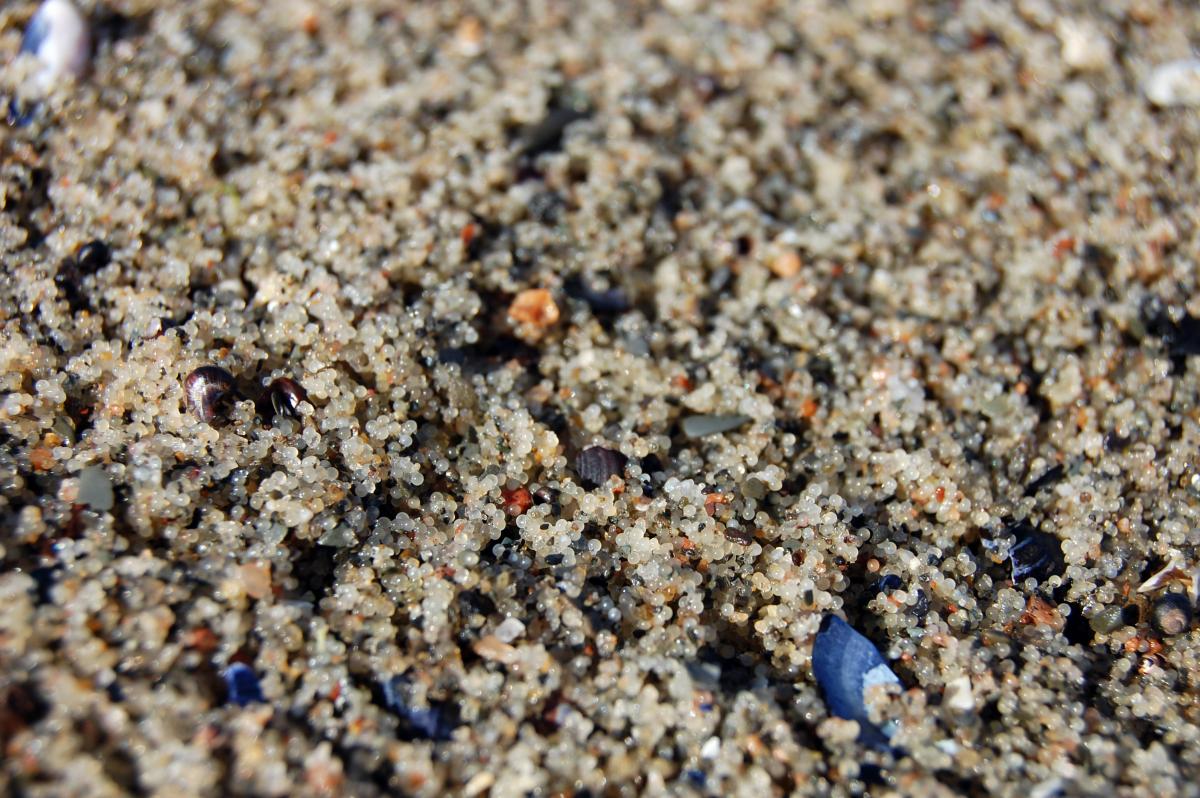 Deepwater Spawning
Deepwater spawning grounds also have substrates composed of gravel and sand and must be located in an area that provides good oxygenation of the eggs. Spawning grounds may be found at depths ranging from several metres to 280 metres. 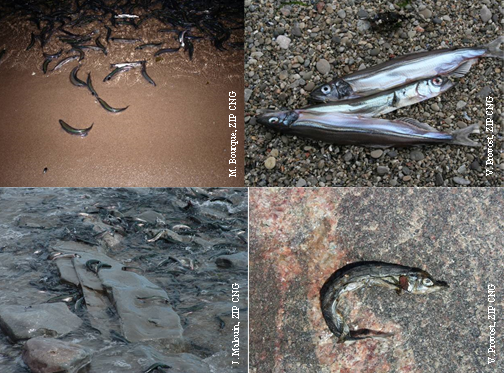