Crayfish of St. Lawrence - About 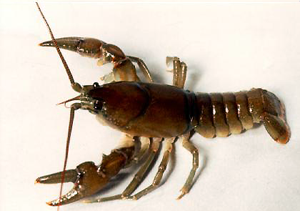 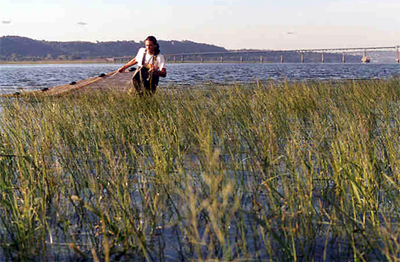 In freshwater systems, crayfish are among the so-called "keystone" species (Creed Jr., 1994; Crandall et al., 2008), that is to say, whose presence is uniquely invaluable to its environment. This is due to the important role that crayfish play as omnivorous organisms, in which case they have both an impact on aquatic vegetation, upon which they feed, and on invertebrate communities, to which they are predators. They also participate in processing organic waste found in freshwater. This special place in the trophic web enables crayfish as a means of energy transfer between different trophic levels within an ecosystem, (Parkyn et al., 1997; Whitledge and Rabeni, 1997; Parkyn et al., 2001).

In addition, crayfish have commercial potential, either for consumption, as in some countries, (e.g., the USA, France, Spain, Denmark, Turkey,) or as fishing bait. In Quebec, two crayfish species are considered interesting for consumption due to their size: the Virile Crayfish and the Spinycheek Crayfish. In the St. Lawrence River, specifically in Lake Saint-Pierre, the unloading of crayfish can reach from 15 to 20 tons per year (MAPAQ, 2003). Among the important facts to take into account about crayfish fishing in the province, first is the realization that Spinycheek Crayfish represent 90% of catches, and second, that 30% of catches are rejected1, thus the effort of implementing such a product on the market faces significant obstacles, both in terms of supply regularity and quantity (MAPAQ, 2003).

Orconectes rusticus
Though this species, commonly known as the Rusty Crayfish, is native to the basin of the Ohio River, it was introduced in many rivers in United States, Canada and Europe. In systems where it is established, the Rusty Crayfish manages to overcome its indigenous competitors and cause their populations to drop in proportion to the growth of its own population (Lodge et al. 1986). This species already problematic in North America (Olden et al., 2006) has been observed several times in the Outaouais region of Quebec (Dubé and Desroches, 2007). The potential invasion of Quebec freshwater habitats by the Rusty Crayfish calls for better knowledge of the crayfish status and continued tracking of its communities along the fluvial corridor of the St. Lawrence.

Orconectes limosus
O. limosus, or Spinycheek Crayfish, is indigenous to the Atlantic side of the United States. Its presence in Quebec may come as a result of an introduction to the region and/or due to the expansion of its natural habitat. The distribution of the Spinycheek Crayfish throughout the St. Lawrence waters suggests that the arrival of the species is contemporaneous with the construction of the Beauharnois, Carillon and Les Cèdres dams. Even if the species has spread throughout most of the fluvial corridor, and in spite of its ability to migrate upstream, it has not been observed upstream of these structures. The Spinycheek Crayfish has had significant impact on indigenous species in European countries where it was introduced, and proved to be an aggressive and invasive species (Holdich et al., 2009). According to Hamr (1998), the species was first observed in Quebec around 1970 although its presence in the river was first noted in 1949. Despite uncertainties surrounding the causes of its presence in the St. Lawrence, it is necessary to document the distribution of the Spinycheek Crayfish as well as its status among the crayfish communities of Quebec. 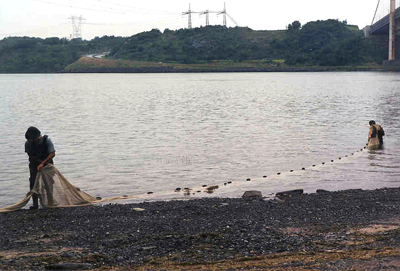 Despite their importance in freshwater ecosystems, crayfish have been of relatively little scientific interest in Quebec. Nationally, the only existing reference document written by Hamr (1998), presented a brief morphological description and the geographical distribution of species. When released in 1998, the article reported on a significant information gap regarding crayfish in Quebec. In 2007, Dubé and Desroches published a complementary article on the presence of crayfish in Quebec which included an identification key. That being said, information on crayfish communities still remains very fragmented, especially relating to the St. Lawrence, one of North America's largest rivers. In the early 2000s, in order to overcome the lack of information, Environment Canada launched a project geared toward documenting crayfish species present in the St. Lawrence River and its tributaries. This project was also partly justified by the need of monitoring the situation of crayfish in the region in respect to the risk of invasion and spreading of the Spinycheek and Rusty Crayfish, two species considered invasive.

The project aims to improve knowledge about crayfish species in Quebec, including their distribution along the river corridor of the St. Lawrence. The project has set up a database that enables time based monitoring of crayfish communities. Monitoring crayfish is important firstly to understand the relative importance of the Spinycheek crayfish in different communities of the St. Lawrence, and secondly, in order to detect the arrival and potential impact of Rusty Crayfish as an invasive species.

For each species, this database includes: