All relevant information from various sources such as historical references, published reports, databases from other government agencies, or personal communications are added to the database. An effort is also made to extend coverage of the site in order to include all of Quebec by including data from northern Quebec and its inlands.

Here the term colony refers to a site where at least one breeding pair of seabirds was seen. The delineation of a colony remains arbitrary and in some cases had to be generalized or adapted in order to take into account the way in which information is reported through various sources within the databank. For example, the colonies can be represented by an island archipelago, a coastal area, a marsh, a forest area, or a migratory bird sanctuary. Some "colonies" have boundaries that overlap, at least partially, which may potentially generate redundant data that must not simply be added up. In such cases, to obtain a snapshot of bird resources in the area, the data user must eliminate the redundancies. This is often a delicate task that may require consultation of original references were data was first published insofar as to determine the overlapping information in regard to the areas surveyed. That being done, one must also figure out which data are most recent, or seem most reliable according to the method used. 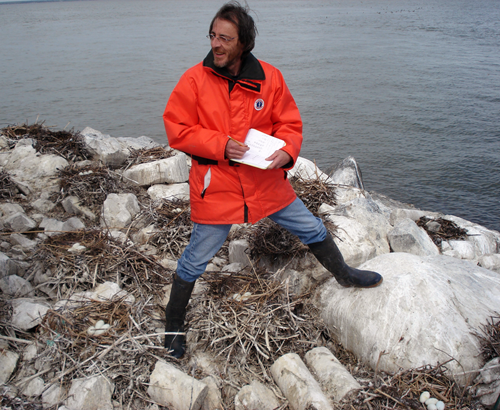 The methods used to inventory seabirds are numerous and vary according to species and types of habitat. The colonies located in accessible locations and those whose nests are easy to find, (such as small rocky islands where nests species like Herring Gulls, Common Eider, Common Terns and Double-crested Cormorants,) make it always possible to estimate breeding populations. Quadrats or transects are sometimes used in forested islands and larger areas. When nests are visible but located on cliffs, nest counting can be done with binoculars from a boat or in the case of dense and large size colonies (e.g., Black-legged Kittiwakes and Northern Gannets) by photographs taken from a boat or a plane. For species whose nests are difficult to spot (e.g., Black Guillemots, Razorbills) or colonies vulnerable to disturbance, (e.g., large colonies of Common Murres), rather than counting the number of visible adults around the nesting sites, a correction factor may be used to calculate the number of breeding pairs. A good overview of the diversity of methods used can be found in the following document:

The study area includes Quebec as a whole, however, seabird colonies, (there are more than 1000,) are mostly concentrated in the Estuary and Gulf of the St. Lawrence. In total, some twenty bird species are listed. Obviously, not all colonies are listed as frequently. For example, since 1925, the great seabird colonies of the nine migratory bird sanctuaries of the North Shore region have been recorded every five years, while other colonies are seldom visited. Thus, when consulting the database, the absence of data between inventory years does not mean that the colony has disappeared.